Okay so I'm changing the name of the painting .  I will wait till the painting is complete to say what the tittle is.
I have an idea. 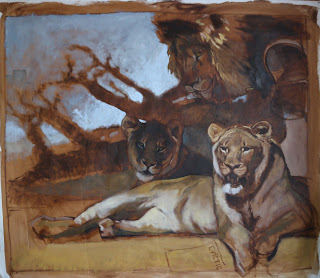 Posted by Get your pet portrait here at 6:05 PM No comments:

This might be one of the first times I titled a painting before  I finished it.
A matter of fact I titled it when it was just an idea.
I'm working on a large unstretched  canvas.
These two lioness's and one lion live at Lions Tigers and Bears. The idea behind the painting is an expression of how wildlife is becoming more urbanized....living in captivity...smaller spaces.

I have started with a burnt umber ground and now I'm pulling out and basically laying out the drawing. 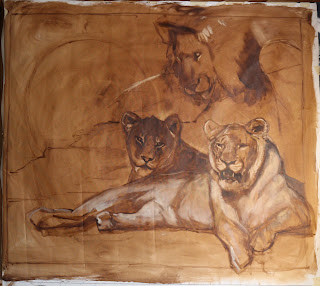 Posted by Get your pet portrait here at 9:37 PM No comments: